What is the treatment for achalasia? 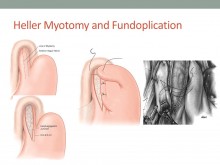 Medication is considered to be the firstline treatment for achalasia. Drugs, including calcium channel blockers(nifedipine) and nitrates are very useful in this respect.

Botulinum toxin(Botox) may also be injected into the LES under endoscopic guidance. However, this treatment is short-lasting and needs to be repeated every 6 months.

Pneumatic dilatation is a technique that is quite useful in patients that do not opt or are not fit for surgery. A balloon catheter is passed down into the esophagus and is inflated at the level of the GE junction. This dilates the LES by stretching and tearing the muscle fibers. Forceful dilatation of the LES always carries the risk of esophageal perforation that needs to be surgically addressed. Balloon dilatations tend to be most effective and long-lasting in elderly patients and may be repeated several times for better outcome.

Surgical myotomy, called a Heller myotomy (see the video), has remained the procedure of choice for many years. The technique involves dividing the muscle fibers of the LES until the esophageal mucosa is revealed. Although the procedure initially evolved with a laparotomy or thoracotomy approach, it was only recently supplanted by minimally invasive techniques.

Due to the fact that patients frequently develop gastroesophageal reflux after a myotomy, it has been a matter of debate whether an anti-reflux procedure should also be added to the myotomy. The most recent achalasia guidelines from the Society of American Gastrointestinal and Endoscopic Surgeons (SAGES) recommended that patients that undergo myotomy should also have a fundoplication to prevent reflux. In this respect, the most frequently performed anti-reflux procedure is an anterior fundoplication (Dor fundoplication).

Laparoscopic Heller myotomy
The website content is strictly informative and is not intended as a substitute for the medical assessment, diagnosis or method of treatment for any medical condition described.