GastroEsophageal Reflux Disease is a condition in which stomach acids reflux or flow back from the stomach to the esophagus. It is usually described as “heartburn”, which is a harsh, burning sensation in the area underneath your chest and just below the neck.

Both acid reflux and heartburn are common digestive disorders that many people experience from time to time.

When you eat, food travels from your mouth down to the stomach through a muscular pipe called the esophagus. A circular, muscle ring at the lower end of the esophagus acts as a valve, allowing food to pass into the stomach and at the same time preventing the backflow of food and acids into the opposite direction.

This muscle ring, the lower esophageal sphincter (L.E.S.), is normally relaxed during swallowing and immediately closes thereafter. GERD occurs when the LES does not function properly thus allowing the stomach acids to flow back into the esophagus. This irritates and damages the esophagus causing when it occurs on a long term basis.

What is the role of hiatal hernia in GERD?

The diaphragm is a muscular structure that plays a major role in breathing and separates the chest cavity from the abdominal cavity. The hiatus is a small opening in the diaphragm through which the esophagus passes and attaches to the stomach.

A hiatal hernia occurs when part of the stomach pushes upward through the hiatus and enters the chest cavity. In most cases, a small hiatal hernia does not cause any problems and is usually discovered accidentally on a chest x-ray. However, a large hiatal hernia may allow stomach contents to flow back into the esophagus causing heartburn and GERD.

What contributes to GERD?

Several factors as listed below may predispose to GERD: 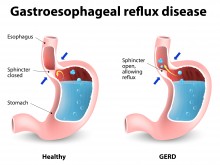