What is esophageal achalasia?

Esophageal achalasia is defined as a primary motility disorder which involves the smooth muscle layer of the esophagus and the lower esophageal sphincter(LES). It is characterized by failure of the smooth muscle fibers to relax causing the LES to remain closed and fail to open when necessary.

In addition to increased LES tone and incomplete relaxation, achalasia is accompanied by lack of esophageal peristalsis, that is, inability of the esophagus to move food down into the stomach.

The underlying cause of achalasia still remains unexplained despite the fact that there are several theories that support a degenerative motor neuron disease.

What are the signs and symptoms of achalasia?

Some of the classical signs and symptoms of achalasia are the following:

How is achalasia diagnosed?

Endoscopy is performed with the patient sedated by passing a scope down the patient’s esophagus through the mouth. Interestingly enough, findings may be quite normal although most of the times, one can observe food debris just above the LES.

Esophageal manometry is considered to be the gold standard in the diagnosis of achalasia. A narrow tube containing pressure sensors is passed through the patient’s nose and into the esophagus. The probe records intraluminal pressure changes along the esophagus as the patient is advised to swallow several sips of water. The classical manometric findings are failure of relaxation of the LES and lack of esophageal peristalsis.

Barium swallow is a continuous X-ray recording(fluoroscopy) while the patient swallows some diluted barium solution. Acute tapering of the LES and narrowing of the gastroesophageal junction are typically seen on x-ray, best described as “bird’s beak sign”. Marked dilatation of the esophagus above the GE junction and air-fluid levels may also be observed. 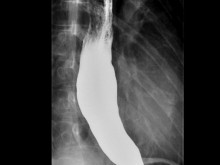 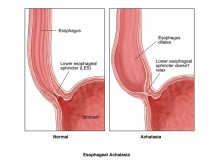