Radical surgery still remains the cornerstone in the treatment of stomach cancer in the absence of metastatic disease. In general, the surgeon aims to remove the diseased stomach and leave behind as much healthy stomach as possible. Moreover, care is taken to remove as many as possible of the nearby affected lymph nodes and achieve a complete cancer resection with tumor-free margins.

The extend of surgery depends on the type and stage of stomach cancer.

Subtotal or partial gastrectomy is recommended if the cancer affects the lower part of the stomach, such as the pylorus or the antrum. Sometimes, a partial gastrectomy is also the procedure of choice for cancers of the GE junction as well. In every case, the affected part of the stomach is resected and the remaining healthy stomach is reattached to a loop of small bowel, namely the jejunum, creating an esophago-jejunal or a gastrojejunal Roux-en-Y anastomosis(the term “Roux” derived from the first French surgeon that performed it and “Y”, as it resembles the Greek letter “Ypsilon”).

Total gastrectomy is usually performed to cure cancers that involve the upper part of the stomach or in case the cancer has spread throughout the stomach. The surgeon removes the entire stomach, as many as possible of the affected nearby lymph nodes and other organs, such as the omentum and sometimes the spleen as well. The lower part of the esophagus is then reattached to a loop of small bowel in a Roux-en-Y fashion as described above to restore the continuity of the foodpipe.

In either a subtotal or a total gastrectomy, nearby lymph nodes are removed. It remains controversial and a point of debate as to which extend these lymph nodes have to be cleared. Surgeons in western Europe and the US support a more conservative lymph node clearance, whereas Japanese surgeons are much more aggressive in this respect. In every case, it takes a skilled surgeon that is specialized in stomach cancer surgery to remove successfully all the affected lymph nodes.

Palliative surgery is indicated for patients with advanced disease and unresectable stomach cancer. This is particularly useful in order to relieve either bleeding or obstruction caused by a fast-growing gastric tumor.

Other treatment modalities are only auxiliary to surgery in stomach cancer. These include chemotherapy, radiotherapy and other targeted therapies. 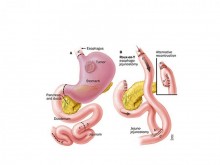 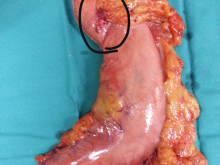 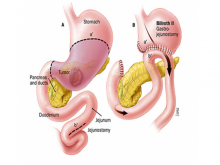