The Roux-en-Y Gastric Bypass (RYGB) is one of the most commonly performed weight-loss procedures worldwide. It was considered the “gold standard” of weight-loss surgery until recently, at which point sleeve has grown rapidly in numbers and popularity.

It is a combination-type of procedure, that is, weight loss is achieved both by restricting the amount of food ingested and by absorbing less calories and nutrients.

Gastric bypass has two major components. In the first component, the stomach is divided by special staplers into a large portion and a smaller portion called the gastric pouch. The gastric pouch can hold up to a cup or so of food, thus restriction is achieved.

However, despite the several advantages and excellent results, RYGB still remains a techniquely more demanding procedure than gastric banding and sleeve gastrectomy and carries a higher risk of complications, such as bleeding, staple-line leakage, bowel ulcers, internal bowel hernias, metabolic disturbances (dumping syndrome) etc. In addition, due to the severe malabsorption of nutrients patients need to be followed-up by their surgeon and are committed to certain dietary restrictions and modifications lifelong, such as taking vitamin and mineral supplements. 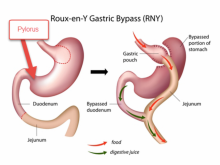 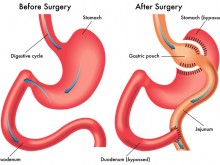