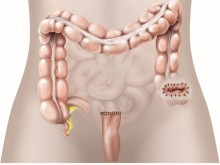 Asymptomatic diverticulosis requires no specific treatment. Patients are advised to have a high-fiber diet which helps to keep stools soft and bulky, thus reducing pressure inside the colon. High-fiber diet includes:

Fiber supplements, such as psyllium husks available at pharmacies and health shops may be a good alternative to a natural high-fiber diet. Patients on a high-fiber diet should also drink lots of fluids, like water and tea.

Episodes of mild diverticulitis can be treated at home with a course of oral antibiotics, bowel rest and painkillers like paracetamol. Patients are also encouraged to take plenty of water and clear fluids.

If symptoms are more severe and prolonged (i.e. fever) you may need to be admitted to hospital to receive IV antibiotics, fluids via a drip and painkilling injections.

In cases of complicated diverticulitis with abscesses, perforation and purulent/faecal peritonitis, urgent surgical intervention is required and emergency colectomy is performed. In the emergency setting,  two scenarios are possible:

Elective resection of the affected bowel is generally indicated by consensus guidelines after 2 episodes of uncomplicated diverticulitis in order to prevent further attacks. Younger patients, as well as, immunocompromised patients are also advised to have elective surgery.