Adjustable Gastric banding is a restrictive bariatric procedure. During the procedure, a silicone band is placed around the upper part of the stomach, thus creating two different stomach chambers. An injection port is then implanted in the abdominal wall, under the skin. The port and band are connected together via soft, flexible tubing.

Gastric banding used to be very popular in Europe in the past 10-15 years because it is a relatively easy-to-do procedure and is fully reversible (band can be removed). However, recent studies have proven that long term results with respect to weight-loss are very disappointing, as suggested by the fact that ~70% of patients will regain the excess body weight 2-3 years after the operation.

Moreover, a very high incidence of complications has been reported (15-45%) 5-8 years after gastric banding, many of which can be really devastating. Band slippage, stomach erosion and stomach necrosis and perforation are some of the most feared complications that are potentially life-threatening.

In summary, long-term ineffectiveness and a high rate of severe, life-threatening complications that may require re-operation have caused a sharp decline in the gastric band operations performed during the last few years. It is estimated that ≥ 50% of patients with gastric bands will have their band taken out eventually because of band failure or complications! 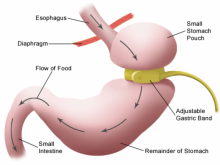 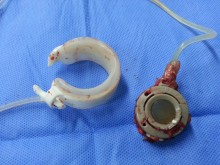 Laparoscopic Gastric Band Removal
The website content is strictly informative and is not intended as a substitute for the medical assessment, diagnosis or method of treatment for any medical condition described.