The vermiform appendix is a worm-shaped structure that projects from the caecum, which is part of the colon on the right side of the abdomen.

The appendix is located near the junction of the small intestine and the large intestine and is supposed to have no specific function in adults. However, it is suggested that in fetuses and children it might play a role in the immune system.

Acute appendicitis is inflammation of the appendix and is considered to be the most common cause of abdominal pain resulting in surgery in the United States. It affects 1 in 1000 people, most often between the ages of 10 and 30 years old. 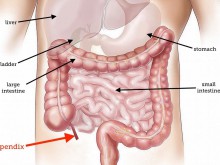 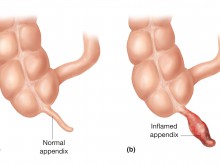 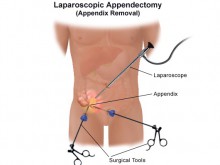